The Netherlands was hard hit by the devastating floods of 1953, but these also marked a new beginning. After the initial despair and the closing of the breaches in the dykes, researchers and engineers joined forces to develop one of the most ambitious long-term visions ever: the Delta Plan. For decades, they worked in a disciplined manner on the construction of an extensive system of dams and storm surge barriers. Successive governments paid the costs. Will we soon tackle the coronavirus pandemic with the same diligence and unity? Probably not. The worldwide pandemic is far too complex a problem for that.

Behaviour during a major disaster

It is also questionable whether the Dutch were actually so unified about a comparatively simple problem such as water safety. The helpfulness and self-sacrifice were considerable when hundreds of thousands of Dutch people lost their homes, and almost 2000 people drowned. But later there were bitter disputes between farmers, environmental activists and safety experts about the closure of the estuaries in Zeeland. ‘You often notice such behaviour during a major disaster’, says crisis expert Kenny Meesters, who works at Tilburg University and TU Delft. ‘As soon as the crisis unfolds, everybody wants to help. But as the crisis persists, there is less momentum, the needs become less clear and conflicting interests arise.’

A matter of staying power

As a researcher, Meesters investigates (information) management in crisis situations, but now he is professionally involved as a member of the National Operational Team Coronavirus. This team collects and organises information, comes up with solutions and advises safety regions, government bodies and partners in the chain. Exciting stuff, but nevertheless he now already expects that we will see the same pattern in the coronavirus crisis as in other major crises. During the first phase – the Immediate Response – things are still quite hopeful. It is a matter of all hands on deck and everybody working together to stabilise the situation and prevent more victims. In the Relief phase, we get the situation under control and we can look further ahead. Spontaneous citizen initiatives dry up, and it becomes clear that it is a matter of staying power. ‘Things become really complicated when we enter the third phase: the Recovery. Because then difficult choices need to be made’, explains Meesters. ‘About money, for example. That’s at the expense of solidarity because a positive decision for one group can have negative consequences for another.’

A crisis is not monodisciplinary in nature

You would think there is a clear role laid out for researchers. And they are assuming those roles. Some professors are issuing recommendations or are involved in decision-making, whereas others are posting their solution via Twitter. So does that mean we are on the right track? ‘That’s difficult to say because research into crisis management is not an exact science. There are many justifiable insights with different answers possible, even within a single discipline’, says Meesters. ‘Many researchers are monodisciplinary, but a crisis is not. An economics professor has a different opinion than a virologist. They are both correct, but ultimately, somebody has to make choices. And you cannot let a crisis be run by researchers alone.’

Should we have listened better to the researchers before the crisis happened? Virologists have been warning about a pandemic for years, and hydraulic engineers knew well before 1953 that the dykes were too low. ‘Every disaster film starts with a scientist who was ignored’, twittered the American astrophysicist Neil deGrasse Tyson recently. He was deluged with expressions of support. Are crises therefore our own fault because we failed to listen to science better? The problem is that researchers detect numerous threats: the risks of a comet impact, the risk of a mega-tsunami caused by the volcanic island of La Palma crashing into the sea … and then we haven’t even mentioned the climate crisis yet’.

Many researchers are monodisciplinary, but a crisis is not

There is a risk that funds available to tackle mega-threats hanging above our head will soon be partially diverted towards controlling the pandemic. Meesters: ‘This is a learning moment: we must be ready for every type of crisis, even if it is the arrival of Martians. You must be prepared for dealing with the unknown and not just the things you know. And that’s possible. There are recurring issues at the metalevel, such as rapidly describing the situation.’

Even a rich country like the Netherlands cannot cover all of the risks, and so we need to learn to deal flexibly with challenges that we do not have a script for. Fundamental knowledge is vital for that. The problem is the gap between scientific insights and crisis management in practice. And it is questionable whether university researchers will ever be able to take the lead in disaster control, states Meesters. That is due to the organisation of the academic research world, which is aimed at generating knowledge and the publication of papers. Researchers who formulate practical tips have less time to work on an academic career or the ranking of their university. Furthermore, the unpredictability of a crisis is at odds with the long-term planning of the university. ‘You can only deploy knowledge quickly if you are agile. Then your own research and educational tasks will be put on the backburner for a while. An institution must be willing and able to do that. In that sense, I’m fortunate with my professorships at TU Delft and Tilburg University.’

Who will read all of those papers?

The question is how research results can penetrate the world of professional crisis managers, who move from one disaster to another. ‘A common saying in international crisis management is Lessons learned are lessons forgotten. I fear that the millions of euros that NWO is spending will change little’, laughs Meesters. ‘In the coming year, it will yield a tremendous surge in the production of papers and undoubtedly important new insights. But who is going to read them all and who will translate this collective knowledge back to a crisis organisation and ensure that it is used in the next crisis?’ Research funding for the coronavirus crisis will therefore result in a mountain of scientific publications that will scarcely reach the practice of crisis management. Are there any rays of hope? Yes, there are. Increasingly often, collaborative projects between researchers and relief organisations are set as a condition, for example in the Horizon programme of the EU, which encourages science and innovation in industry and academia. ‘Such projects ensure new insights and the exchange of ideas. Skills and contacts then find their way into everyday practice, which means that, in a following crisis, you can more quickly find the right people who speak the same language.’

Researchers are partly working in the field

Meesters thinks it is high time that universities and crisis organisations joined forces. ‘Crisis organisations should offer a listening ear to researchers even if that is difficult during a crisis. Universities must realise that they not only need people who are good in writing papers but also researchers who partly work in the field. Because insights from the field, in turn, inspire new research.’ He is trying to set a good example himself at the moment. Together with three master’s students, he assists the national coronavirus team with information management, and he researches this topic too. He is also approaching universities on behalf of the team to share existing knowledge. 'There’s no time to write research proposals and form consortia. Fortunately, universities are joining forces and appointing contact people for the rapid disclosure and sharing of their knowledge. So there is certainly hope for the future.’ 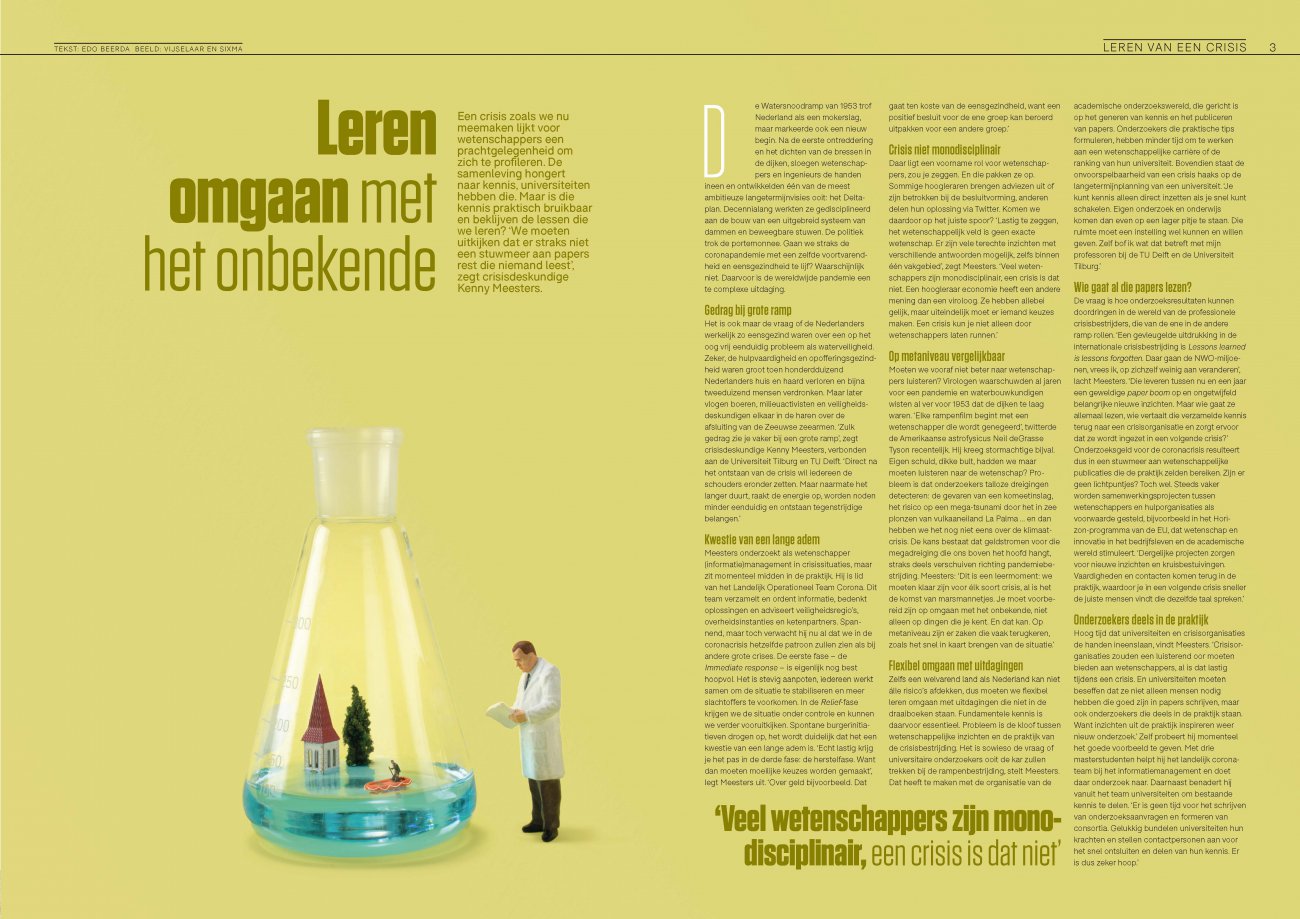